Jenna emailed this recipe to me from White on Rice Couple. And I was so skeptical that I had to try it…even though I rarely make Mac n Cheese because of the boy’s dairy allergies. I made it anyways, and it worked out perfectly…

Right before Christmas, Ryan woke up one morning with a fully body rash. After grilling him about what he ate at school the day before, thinking it was a delayed food allergy reaction, I made an appointment that morning with the pediatrician. She diagnosed him with Fifth disease, a virus that causes fully body rash in kids…and can cause rash, fatigue, joint pain and swelling in adults.

I commented to our pediatrician how I’d been feeling fatigue like I’d never felt before, along with some malaise but no other symptoms. She told me to watch out for the symptoms above. And lo and behold I broke out into the rash the following week, and also ended up super swollen hands, very sore ankles and knees for about 5 days. I felt very much like a leper with the rash…and very much like an 80 year old woman with severe arthritis. But I welcomed the time I got to spend resting on the couch, and I enjoyed the time I got to spend reading with the boys as well!

According to my family practice physician sister, I got hit pretty hard with it, as it doesn’t usually hit adults as it did hit me. Most adults don’t get Fifth disease because they had been exposed to the virus as a child, built the necessary immunity and don’t have to worry about it as adults. Obviously I was never exposed to it as a child. And neither was my dear friend, Steph. Her son had it over Christmas…and he shared it with her. *sigh

Yesterday morning I get into a text conversation with her about all this Fifth disease madness. It took all of 3 milliseconds for me to figure out that I’d be taking her this mac n cheese, cookies, and other goodies for dinner last night. She is in the “worst of the worst” phase…and I wasn’t taking no for an answer! We are now in an exclusive “Moms with Fifth disease club” now…and we Fifth diseasers have to look out for each other 😉

I gave her about 15 warnings about this being a new cooking method, that I hadn’t tried before….and apologized 22 times in advance…in case it bombed.

Well, apparently it didn’t bomb. This is part of the text exchange we had this morning.

Apparently, it was the best ever…even after being reheated!

I only modified the recipe to make more to feed her hungry boys…and to use what I had on hand….

Also…this is a very hands on cooking method…the results are totally worth it though. Read the directions carefully 🙂

Check out all the great meal plans that Erin offers to help make your life a whole lot easier! 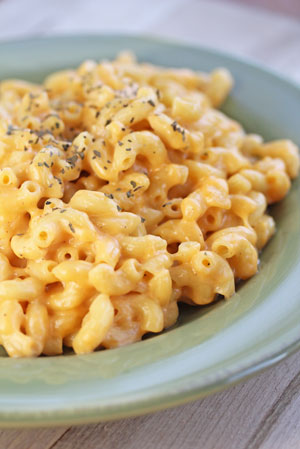