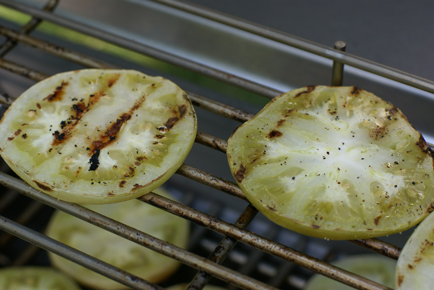 So that totally almost happened to me in the grocery store parking lot. Except, not really.

I was pulling out of a prime time parking space (front and center!) when 2 cars moved into position for my space. The space is certainly the most coveted space in the lot.

Both cars whipped their blinkers on at the same time. Both cars moved in tight as I maneuvered out of the spot. Both cards inched closer forward, as I inched backwards.

As I move forward and out of the lot, I could just picture that scene…the smaller zippier car whipped into the space, while the minivan just didn’t make the move fast enough. I had visions of the minivan pulling a Kathy Bates move. I could almost hear the choice words flying in the parking lot, and the glares as both parties encountered each other on the cereal aisle.

While nothing actually happened, I could still feel the tension. (Active imagination I must have!)

We were talking about green tomatoes, weren’t we!? I picked two up a few weeks ago at the farmer’s market…and rather than fry it up, I decided to grill it into tangy perfection!!! 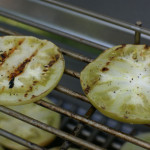 We were talking about green tomatoes, weren't we!? I picked two up a few weeks ago at the farmer's market...and rather than fry it up, I decided to grill it into tangy perfection!!!
Prep Time5 minutes
Cook Time5 minutes
Servings - 4 servings