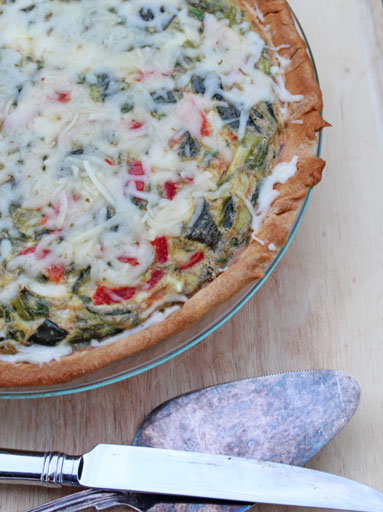 Egg pie. That’s what my about to be 4 year old called this quiche.

He has become quite the sous chef in the past few weeks…always coming into the kitchen and helping me cook. I’ve started to let him help me crack the eggs (highly supervised still!) and taught him it’s better to crack on the counter than the edge of the bowl, and how to keep the yolk from running all over the counter.

He said, “Mom, I don’t think I like ‘egg pie.'” I responded with the typical you-won’t-know-til-you-try-it montage that every parent with a toddler or picky eater preaches on a daily basis.

I carefully cut a bite that would please his picky taste buds and he tried. And then this…

It was tough, but I resisted the second half of that “see, you never know what you might be missing out on” speech and instead let him keep enjoying his egg pie.

Love the flavors that filled this quiche, and I hope you will too! 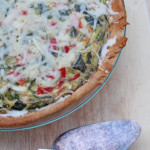 An "egg pie" breakfast for dinner meal! Also known as a quiche - and this one is delicious!
Prep Time10 minutes
Cook Time25 minutes
Servings - 4 servings