Couple things before we get to the recipe, ‘kay?!

First. Are feeling like you can’t get enough pumpkin in?! I think that after the pumpkin shortage of 2009 and 2010 all I want to do is make pumpkin this, or pumpkin that. After not using pumpkin in any recipes since earlier in the year (when my holiday stockpile ran out), I’m find myself trying to make up for lost pumpkin recipes!

Second. I was playing around with my Pumpkin Chocolate Chip Muffin recipe last week and decided to try making them with our dairy-free butter instead of oil. Oh my moist-ness! They had the fluffiness and texture of a cupcake. But with the taste of the muffin.

Third. I have already been dreaming about the desserts that I’ll be making for this Thanksgiving. I’m thinking about putting a pecan spin on a pumpkin pie…but without the corn syrup. I’ve browsed a few Pumpkin Pecan Pie recipe…all of which call for corn syrup. So I think a little pumpkin and pecan pie experimenting is in order in the coming weeks.

(All this leads us to this new great recipe.)

(Which you really should try.)

Finally. In a moment of culinary genius, I thought to make the new buttery, fluffy pumpkin chocolate chip muffins without the chocolate chips. And with a cinnamon pecan streusel topping. 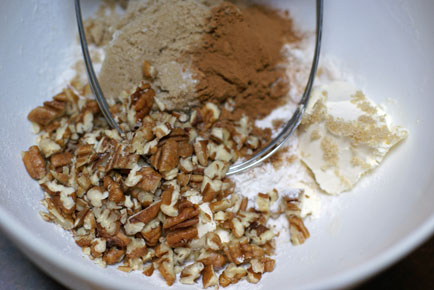 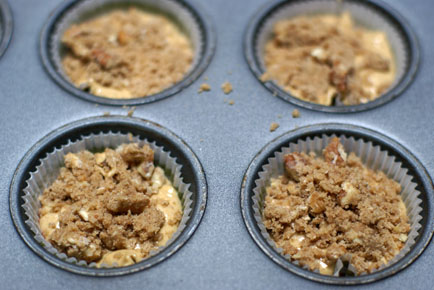 Don’t be shy when it comes to sprinkling the streusel. 🙂 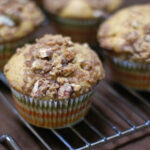 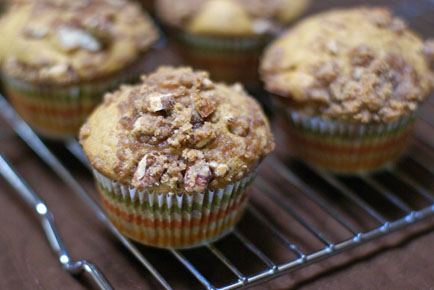