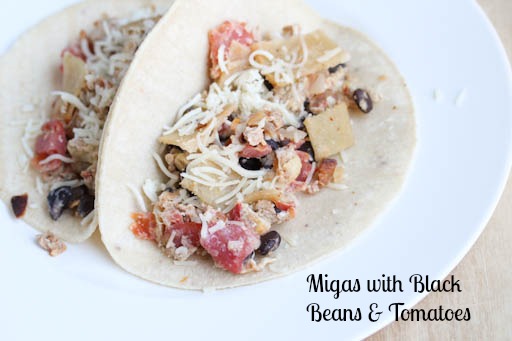 Not long ago, I had lunch with some friends in Austin at Torchey’s Tacos. (If you’re in Austin, Houston or Dallas, you must give these guys a try. And I might start a petition that they get a truck set up in San Antonio asap.) Ever since, all I can think about making for breakfast is breakfast tacos. And lunch tacos. And dinner tacos. I think I might need an intervention. Migas are a kind of taco that I’ve never shared before here on $5 Dinners, and given my recent tacos obsession, the time has come for Migas.

So, what in the world is a Migas?

(Please forgive the singular-plural thing that happened there. Just work with me here.)

Migas come from Spain/Portugal and are a traditional “next day” meal using leftover bread. It’s popular Tex-Mex cousin/twin contain leftover corn tortillas, cut up in strips, fried up and mixed in with the eggs, tomatoes and chilies. Then wrapped in another tortilla and served alongside refried beans.

When I make Migas, I use corn tortillas for the “shell”…because I just have a brain block on the concept of wrapping a flour tortilla around a delicious egg mixture that contains crunchy corn tortillas. Flour with corn…just can’t do it. Corn with corn…perfection. I also leave out the hot peppers, because I know the kids would take 1 bite, drop their tongue out of their mouth panting that it was too spicy. But I’m going to include a jalapeno pepper (or hot pepper of your choice) in the recipe. Because they really should be included. Add it or don’t…depending on your tongue’s liking to spicy foods.

(My fellow south Texans ~ Hatch chilies will be in stores all over south Texas soon…would be amazing cooked into your next Migas meal.)

Now that we’ve got the what and the how I like it’s out of the way, let’s get to the recipe…

Migas come from Spain/Portugal and are a traditional "next day" meal using leftover bread. It's popular Tex-Mex cousin/twin contain leftover corn tortillas, cut up in strips, fried up and mixed in with the eggs, tomatoes and chilies.
Prep Time15 minutes
Cook Time10 minutes
Servings - 4 servings