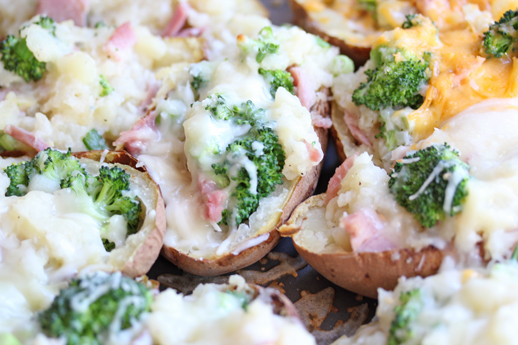 Duffy T, a long time friend of $5 Dinners, sent my a note about the way they do twice baked potatoes. They turn them into an entire meal by adding either chicken or ham and broccoli and cheese to the mixture.

I loaded up the mashed potatoes with leftover ham from the freezer, broccoli florets, some green onions.

I made these just before leaving town for Smuckers earlier in the week. I had two as I ran out the door -leaving the rest of the meal behind for my husband and boys to enjoy.

While on the drive up to Orrville, something monumental happened.

Back story – several months ago my husband decided to switch his cell phone service to a “pay as you go” plan. He’s not much of a phone talker, not much of a texter and decided it would be worth the savings to drop him from the monthly plan and go to a pay as you go plan. The texts on his plan cost $$$. Nothing ridiculous, but enough that he chooses not to text often.

So I’m riding along towards northeast OH when I get a monumental text from my husband.

Thank you. Dinner was AMAZING!

I smiled – and didn’t text back. Because that would cost money. I waited until we talked when I got to my hotel – and he kept raving and raving! 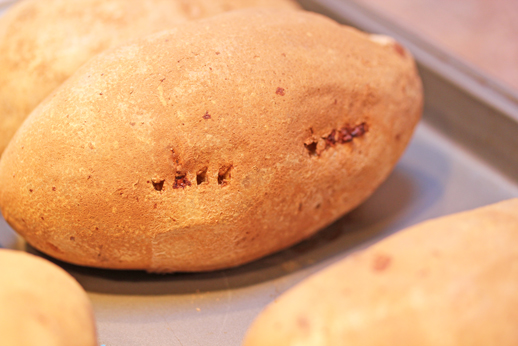 Twice Baked Potatoes Tip: Poke 2 fork-holes in the side of your potatoes when making twice baked potatoes. Place them on a baking sheet while cooking so any juices don’t drip to the bottom of the oven. Then they will slice perfectly down the length, and there will be no holes in the bottom of your shells. 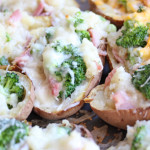