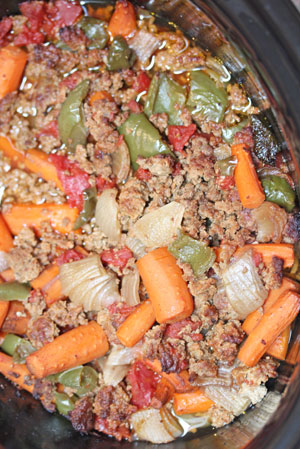 Last week I decided to tack onto my batch cooking plan…doubling up on browning some ground beef. I ended up doing spaghetti for dinner one night and saved the other half of the beef I ground. I thought I’d use it later this week or next week…but ended up making this goulash over the weekend. I had all the other ingredients on hand…and it was perfect for a chilly, dreary weekend!

After slow cooking what you see above, I stirred in some sour cream into each serving and served it over noodles.

Simple, easy weekend meal…just what I needed after a busy week! 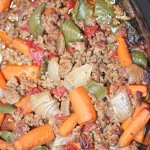 Cook the meat and veggies together in the slow cooker, then stir in some sour cream and serve over noodles.
Prep Time10 minutes
Cook Time8 hours
Servings - 4 servings