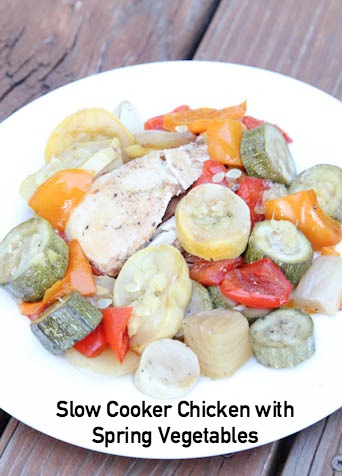 I rarely. I mean rarely. Like practically never. Ever. Maybe once every 2 years. Look at other cookbooks. I use my own all the time (for reference in baking or to check if I’ve done that recipe before or to replicate a flavor combination, but cook it differently.)

A few weeks ago, I was clearing out a cabinet above the kitchen desk. I was really looking for books to put into the boys’ summer reading baskets. I noticed a few cookbooks that I’d received from blogger friends, so I pulled them down with the intention of leafing through them when we were at the ranch for Memorial Day.

I managed to carve out a little free time to leaf through them and came across this recipe from my friend Stephanie from A Year of Slow Cooking. This recipe comes out of her first “Make It Fast, Cook It Slow” cookbook. (See all of her cookbooks here.)

That’s another story for another day.

I wanted to share this recipe with you because I have a feeling you could make this for wicked cheap these days…zucchini and squash are super low cost right now…peppers have been $.50-$.60 at my local grocery stores. And well, I hope you know that you should always buy extra packages of chicken breast or thighs when they’re on sale. If you’re really stretching your grocery bucks…this recipe would totally work with bone-in chicken thighs or drumsticks, as well as bone-in split breasts.

I didn’t follow the recipe directions that Stephanie suggested directly…mostly because I’m lazy. And I don’t like doing the dishes. And I didn’t want to dirty another bowl. And I was literally ‘dumping and running’ out the door to get the kids to VBS.

If you’re wanting to get into slow cooking and don’t know where to start, Steph is your girl. Get her book(s).

Now for the recipe… 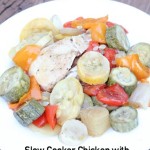