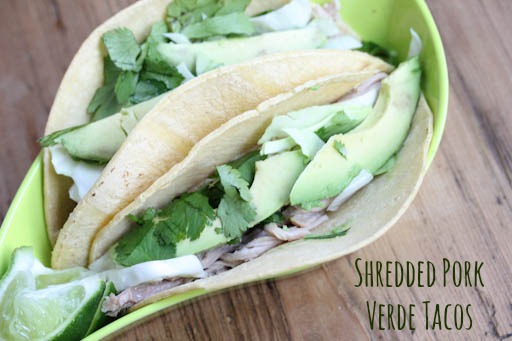 I find that I turn to tacos more and more. Because the ingredients are cheap (10¢ limes, 38¢ avocados, 48Â¢ cabbage heads, 29¢ big bunch of fresh cilantro, yo!) and because I know my kiddos will gobble them up…in some form or another.

Two will pick out all the parts from inside the taco and eat things one by one…avocado, then pork, then tortilla. One of those two meticulously picked off all the cilantro leaves as well. (He doesn’t know what flavor he’s missing out on!) And then there’s my Charlie who eats whatever you put in front of him, in whatever form you present it.

Regardless of how these were eaten, they were a hit. The pork meat was phenomenal and I’ll be make these on a regular basis.

Here’s the video I posted on Vine, of loading the slow cooker. Then in the later afternoon, I pulled the meat apart and let it soak for an hour in the lime-cilantro juice in bottom of the slow cooker. Delish, delish.

Also, a dollop of sour cream would be a great addition.

Also, Happy November y’all…lots of great ways to save on Thanksgiving and new recipes to try coming soon 🙂 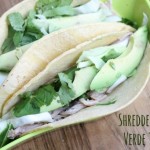