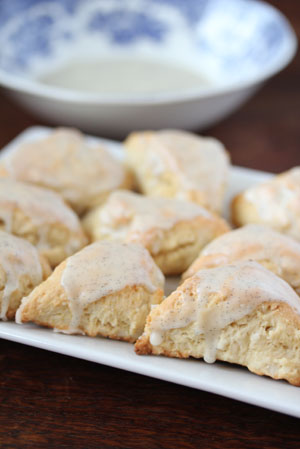 Every since treating myself to one of the petite little scones at Starbucks on a recent publicity trip, I’ve been dying to make them.Â  Because I know without a shadow of a doubt that I could make them for 90% less than what I paid for at the ‘bucks.

Before we get to the recipe, I’d like to have a pronunciation lesson.Â  I have a friend who has lived in England and she told me recently that scOnes (sc-long o sound-nes) are actually pronounced scOnes (sc-short o sound-nes). This was news to me…and I quite like saying it like an fine English woman from the countryside.

Have you heard that?! How do you pronounce SCONES!?

Anyways, here they are. For about $.10 a piece.Â  Less if you figure that I get the maple syrup and vanilla beans for free using Amazon credit from Swagbucks.

The pictorial tutorial…for all you visual home chefs out there! 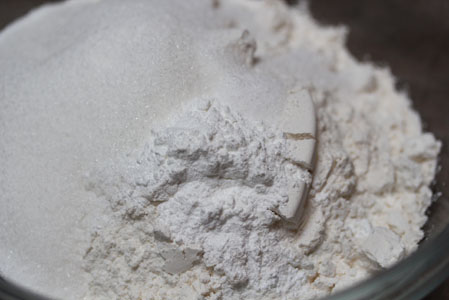 Flour, sugar, salt powder. Add them to a mixing bowl. 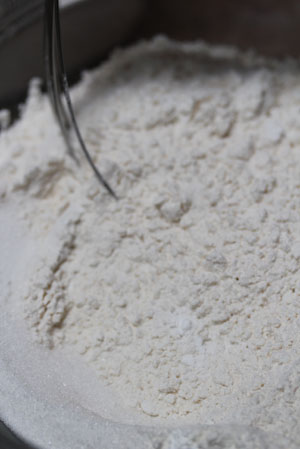 Use the pastry blender or fork that you will use to cut the butter in to whisk them together. 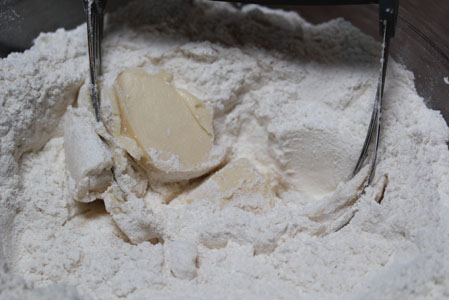 Cut in the cold butter with a pastry blender or fork. Until crumbly. 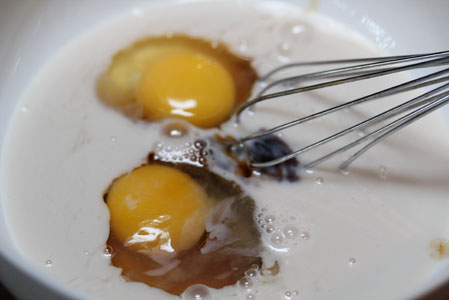 In a small mixing bowl, whisk together the eggs, milk, maple syrup and vanilla. 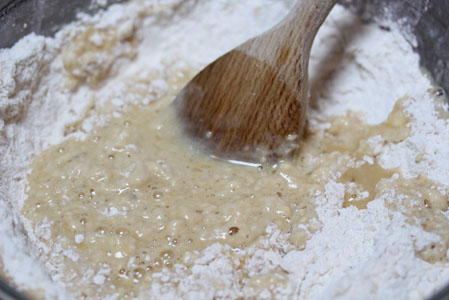 Pour into the dry ingredients and stir with a wooden spoon until a dough forms. 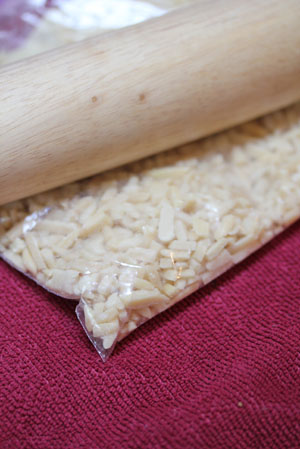 Crush the slivered almonds in a plastic baggie with a rolling pin.Â  You could run a knife through them, but that gets messy. Rinse the baggie and reuse it.Â  (Crushing them on a kitchen towel will prevent the almonds from making little holes in the baggie.) 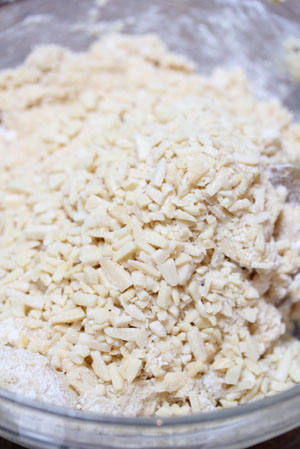 Add the almonds to the dough and work them in with the wooden spoon. 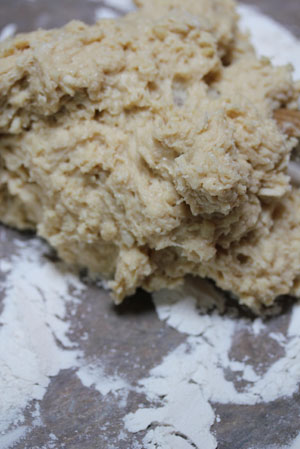 Place the dough onto a well floured surface and shape it into a rectangle that’s 3/4 – 1 inch high. 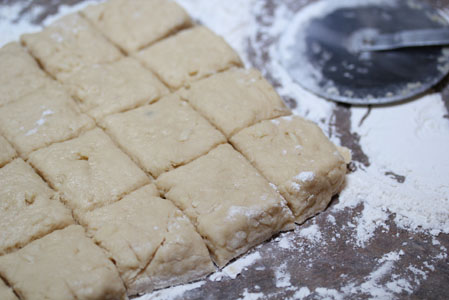 With a pizza cutter, cut it into 24 squares.Â  Dip the pizza cutter into the flour nearby to help it cut through better. 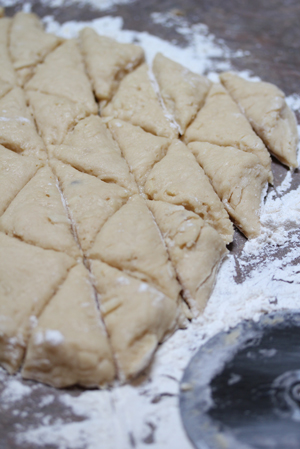 Then cut the squares that you made into little triangles. 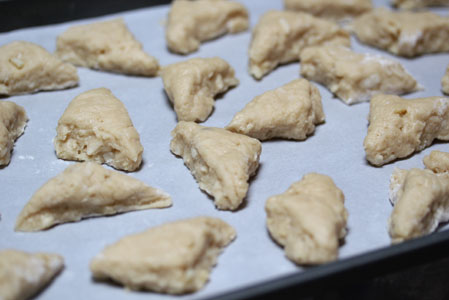 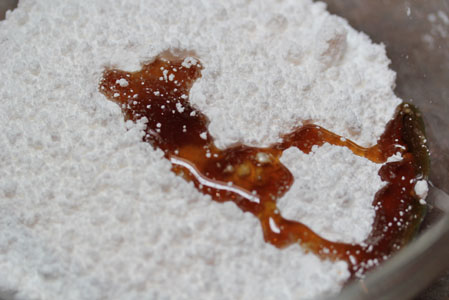 Meanwhile, make the glaze.Â  Add the powdered sugar and maple syrup in a small mixing bowl. 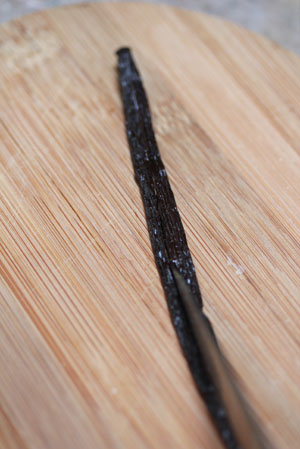 Slit the vanilla bean lengthwise, being careful only to slit the top side of the bean and not cutting all the way through to the cutting board. 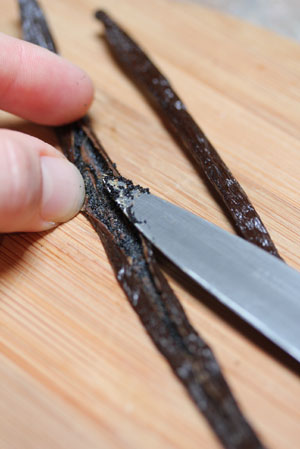 Pull the edges away from each other for the length of the bean, exposing the vanilla seeds inside. 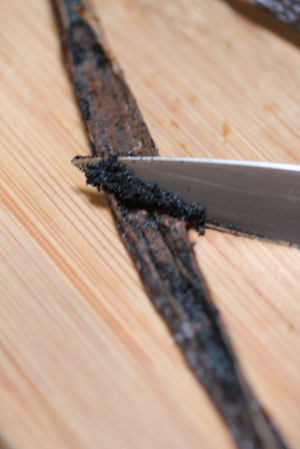 With the small edge of your knife, run it down the length of the vanilla bean, gathering up all the tiny seeds. 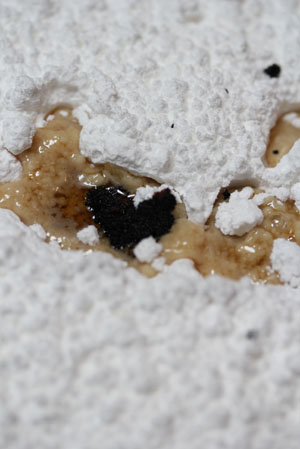 Drop those in with the powdered sugar. 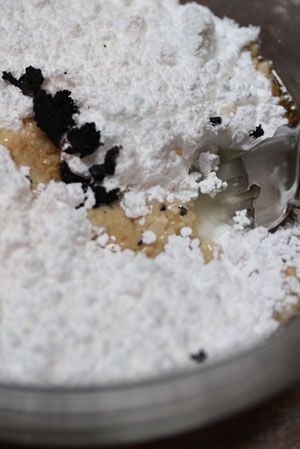 Add the 3 Tbsp of water and stir until the glaze forms. 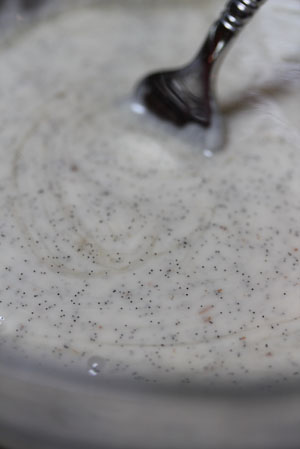 Add 1 tsp of water at a time, until reaches the desired consistency. 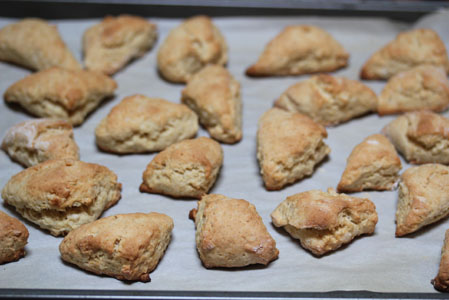 Once slightly browned on top, remove from the oven. 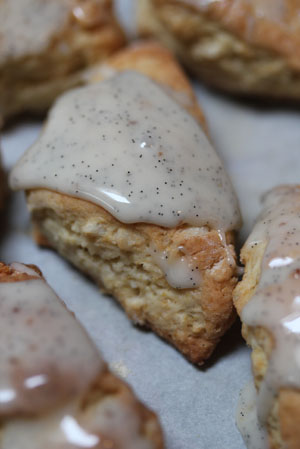 Slather glaze all over. Be generous. 🙂 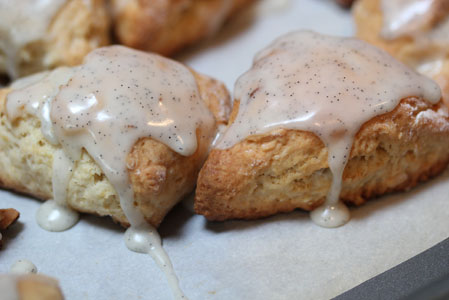 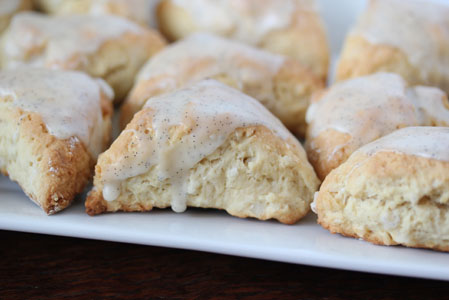 I intended to make these for dessert, but they’d make a lovely afternoon snack.Â  With a cup of tea or coffee! 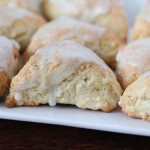