Until recently, I’d never consumed Swiss chard.  What a shame!

It was really quite tasty and it will definitely be growing in my garden next year!!

I picked up some Swiss Chard at the farmer’s market for $3 for a huge bunch. While I could have just used the Romaine or Bibb I have in my garden, I wanted to “expand my horizons” and try a new “green.” So Swiss Chard it is!

Swiss Chard comes in a variety of colors from white to yellow to a deep magenta color. It is loaded with essential nutrients like Vitamin A, C, K, magnesium, potassium and iron. It’s a real nutrient powerhouse!

It’s smell reminds me a lot of spinach, as did the way it cooked. And what does spinach go perfectly with…bacon! So I thought I’d do pasta with bacon and Swiss Chard.

(Oh, and fresh spinach from the garden can easily be substituted into this pasta!) 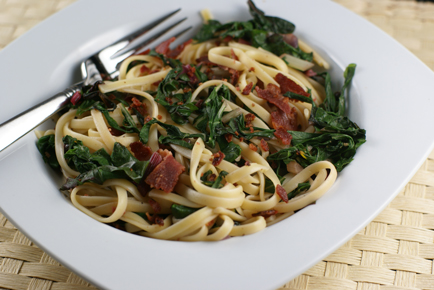 Linguini with Swiss Chard and Bacon

1. Cook the bacon in a skillet. Cook the pasta in a saucepan. You’ll need to reserve about 1/2 cup of pasta water before draining.

2. Set aside to drain on paper towel.  Then crumble (or cut with a knife.) 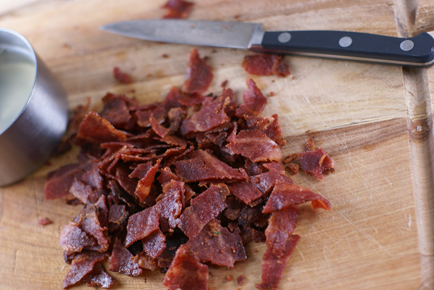 3. Rinse and pat dry the swiss chard. Chop off the stems. Dice a few of them to toss with the leaves after you chop them.  It makes it look pretty! 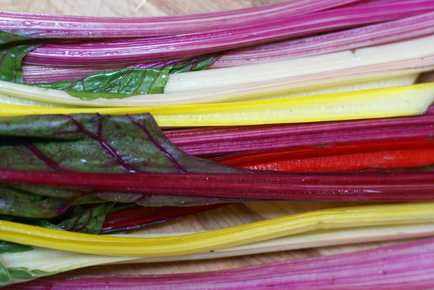 5. Roll the leaves up.  Like you’re rolling a cigar! 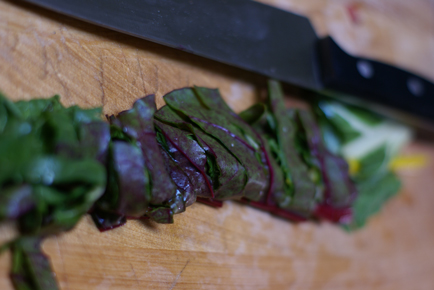 7. Separate the circles and run a knife lengthwise a few times to cut the leaves down a little more. 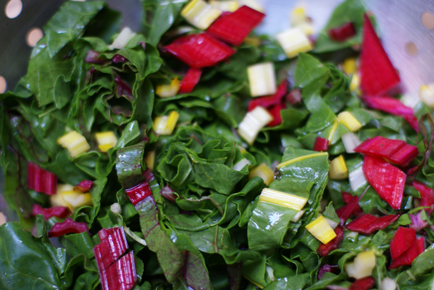 9. Give fussy baby a chewable kitchen utensil.  (I’m often asked what I do with Tyler when I’m cooking, and here is the answer!  No really, I try to do as much prep work as I can while he is napping, but if I don’t get around to it, I let him chew on my plastic spatulas!) 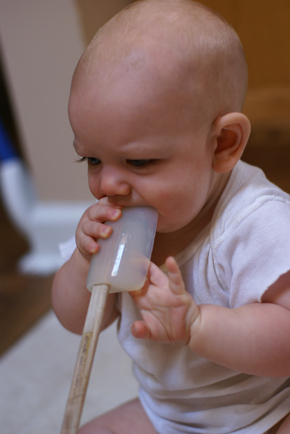 11.  In the same skillet that you cooked the bacon…saute the red onion in the bacon grease. 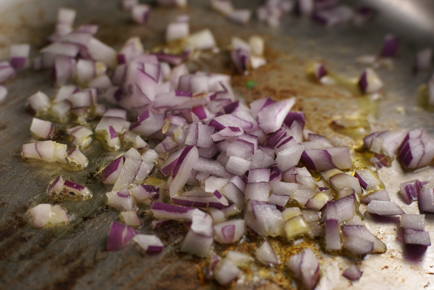 12. Once the red onion becomes translucent, add the cut Swiss chard and saute for a few minutes.

13. The chard will begin to wilt as it cooks. 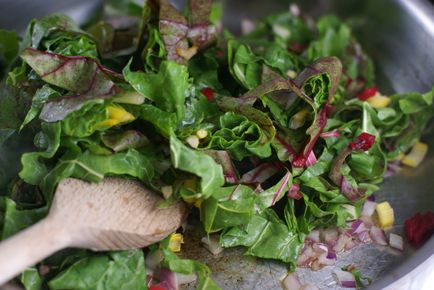 15. The stovetop.  Bacon is cooked. Pasta is finishing up as the chard sautes. 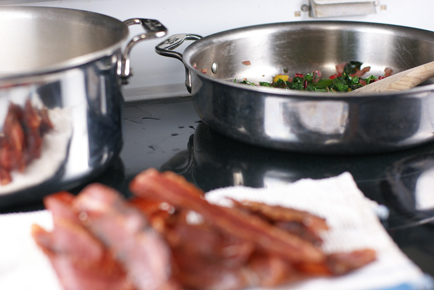 16. Assemble it all together. Toss the crumbled bacon, sauteed Swiss chard, linguini and pasta water.  Season with salt and pepper to taste.

Now you don’t have to be afraid of Swiss chard when you see it at the farmer’s market, or if you are debating whether or not to add it to your garden in the future.

Do you have a favorite recipe that calls for lettuce or any of greens that are growing in your garden?!?  Do share…