This recipe is born of a desire to not waste leftovers.

When my kids were young and their palates were limited I often had a spaghetti night and a taco night. At the end of the week when I cleaned out the fridge I often had mix matched ingredients. Leftover noodles, but no sauce. Leftover taco meat, but no tortillas. Instead of throwing them out I decided to combine them. My kids enjoyed the unlikely pairing so much that I created a recipe that could be made even when I didn’t have leftovers.

Since this recipe uses half a pound of hamburger and half a package of spaghetti, it is an easy recipe to double. 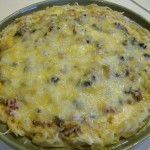